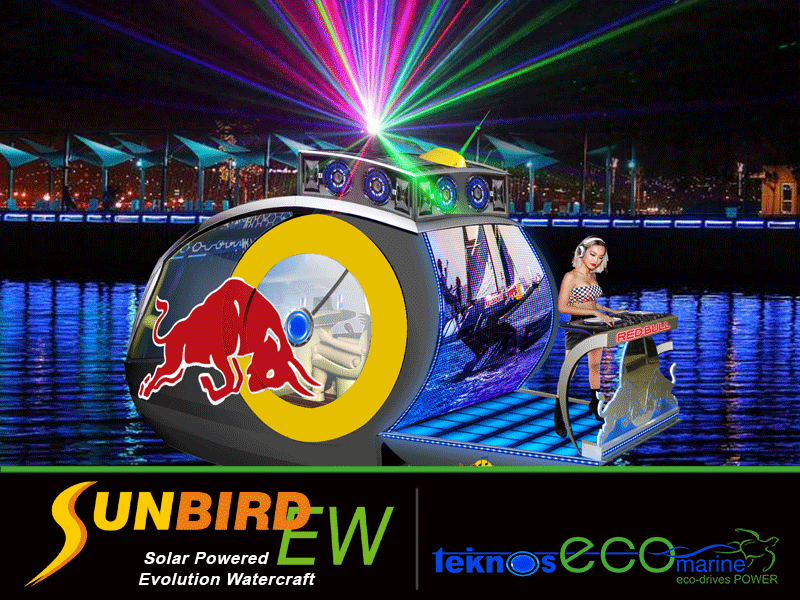 (All Design and Production Rights belong to TEKNOSGROUP )

Teknos Eco Marine; designs and produces special electric solar boats for theme parks. Theme park electric excursion boats are used in existing large pools, ponds or new water pools. Solar electric pleasure boats are special production, design of the future boats are high quality and have ultra equipment, can safety is at maximum level. There are also advertising places on the hulls of boats made in colors and patterns appropriate to the theme of the park. The depth of the pool where the boats will float should be minimum 50cm. These trendy boats are equipped with high performance sound systems and led lights.

SOLAR SYSTEM; The 2400 watt solar system is used to charge the batteries of the electric pleasure boat.
CHARGING SYSTEM; The automatic charging unit on the berths of electric boats charges the batteries quickly while the boats are in standby.
BATTERIES; Specially designed lithium batteries are used for long-term use. Long life 2000-3000 filling can be made.
MOTOR and JET TURBINE; In the boats, eco series engines and closed turbine jet propulsion systems which are specially designed and produced for theme boats are used. 2 X 500 watt waterjet turbine
BOAT SIZES; Length = 350cm, Width = 200cm, Height 190cm
CAPACITY ; 4 people seating capacity
BALANCE SYSTEM; It automatically adjusts the balance of the boat according to the weight of the occupants.
KAPSUL BOAT FEATURE; The boat is capsule-specific, used all year round in summer and winter seasons. Automatic opening and closing of windows
AIR CONDITIONING; The boats have air conditioning and heating. It works automatically according to the weather conditions.
BODY STRUCTURE; The hull of the boat is produced with advanced technology composite infusion technology. Long service life
SOUND AND VISUAL SYSTEM; Temapark boats are equipped with high performance marine series 750W sound system. The multimedia-enabled system is used via the android screen. Bluetooth connection can be made.
PHONE CHARGER; Cordless phone charger for every phone.
GLASSES; UV-filtered glass is used, does not harm people in high sunlight.
LIGHT SYSTEM; There is full led lighting inside and outside the boats. Underwater effect lighting, onboard lighting and indoor lighting.

Teknos EcoMarine manufactures solar and electric boats which are developed for the service sector in various fields. It is used in fossil fueled engines in boats with electric motor system. Taking into account the qualifications required for service boats, designs are made by Mehmet TAŞANYÜREK and Nadir DÜLGEROĞLU, who are the first Turkish designers to design Ferrari. These boats are designed and produced according to the purpose.

All design and manufacturing rights belong to Teknos Group Sunbird series boats are manufactured in our own shipyard, all of which are provided by the local design and manufacturing can provide continuous support to users. Specially designed boats for the monitoring of water basins, dams and lakes are created with the necessary functions and equipment is added. Capsule can be used in all weather conditions all year round with the advantage of being a boat, heating and cooling air conditioning system is available. The auto-opening windscreen and rear cover provide efficient operation with the platform. Teknos Ecomarine, which is the leader in our country in the field of electric marine vehicles, designed the product with the highest safety coefficient by being sensitive about the research and inspection series boats. Appropriate equipment is integrated into the boat for 24 hours day / night control of water basins and necessary interventions.

SunBird series products, which are ideal for coastal inspection boats in need of regional and district administrations, are produced specially for the project. There are situations where the control of the beaches and facilities on the beach from the sea is necessary, the biggest advantage of these boats is that they can dock in shallow places and can move among the people at sea. It does not harm any creature with the advantage of using a propeller-free turbine system. There is an underwater and an underwater sonar / radar system and there is no possibility of hitting people or anywhere else.

Teknos EcoMarine has developed solar electric capsule boats as lifeguards and safety boats suitable for use on beaches and beaches. Boats with superior electronic equipment are tracked and used with GPS satellite systems. If necessary, the boat can be controlled by remote control without driver, the boats capable of patrolling autonomously on the specified routes can see the distances at night and day by telescopic rising cameras and transfer them to the center instantly. Very suitable for coastal areas, beaches and lakes.